When berthing without tugs, it is essential that the effects of lateral motion are fully understood.

When a ship moving forward turns by use of engines and rudder alone, the effect of centrifugal force is to push the ship laterally away from the direction of the turn.

When turning by use of bow thrusters alone, the thruster simply pushes the bow to port or starboard. There is no centrifugal force or lateral motion

Approach the berth at an angle, because astern thrust will be used to stop the ship and swing the bow to starboard and the stern to port. This will parallel the ship to the berth. Once stopped, the ship can be maneuvered into the final position using astern power, which gives transverse thrust and kicks ahead with appropriate rudder as required. The actual sequence will depend on the available berthing space.

If sternway is developed and transverse thrust causes stern to swing to port, lateral motion will be to starboard and away from the berth. This may be useful if a new approach is required.

If sternway develops – lateral motion is to starboard

What can go wrong:

• Approach speed too high
Ship can hit the berth with her bow before stopping, or a large astern movement used to stop the ship, and the resulting transverse thrust, can cause the stern to hit the berth.

• Kicks ahead go wrong
If a sharp kick ahead is made close to the berth then excessive forward motion can result and the ship’s bow can strike the berth.

If berthing against a knuckle, it is important to land flat against the straight part of the quay, not on the knuckle.

Aim to approach the berth with the ship parallel. The effect of transverse thrust will swing the bow towards the berth.

To stop the ship, it will be necessary to put the engine astern. Transverse thrust will probably push the stern to port and bow to starboard. To correct the effect of the transverse thrust, initiate a port swing of the bow before applying astern power.

What can go wrong:

• Approach speed too high
The need to use a large astern movement could cause the bow to swing towards the berth and strike the berth.

• Ship stops some distance from the berth but parallel to it
A kick ahead with full starboard rudder could result in the bow striking the berth at almost 90º. The situation can be made more difficult because the stern is driven away from the berth.

Berthing between two other ships

It is normal to berth a ship between two other ships with little more than the ship’s length of clear space. Procedures for berthing between two ships will depend upon local conditions. However, the textbook approach is to stop the ship in the required fore and aft position, but clear of the other two ships, and then work it alongside using thrusters. Alternatively, the bow or stern could be put alongside the berth first.

Although this chapter concerns berthing without tugs, larger ships that are not fitted with a bow thruster will require tug assistance for this manoeuvre.

• Current has a greater effect at slow speed
As speed is reduced approaching the berth, the current exerts a proportionally greater influence which may cause the ship to start to drop astern with the danger of contacting the ship astern.

• Other forces can cause a ship to move
The ship can pick up headway or sternway when working alongside, either through the effects of wind, current, or asymmetrical lead of fore and aft springs.

• The ship’s propeller may not have zero pitch
Residual pitch on a controllable pitch propeller ship can cause headway or sternway. This is potentially problematic when berthing in a confined space.

• Use of bow thrusters may not always help
In some ships and depending on thrust tunnel design, the bow thruster can impart headway. 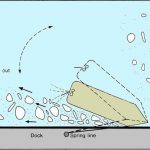