A table of offsets, although accurately defining the hull shape, does not provide an immediate feel of the main characteristics of that shape. There are some “coefficients” which can be obtained for the underwater hull which provide clues as to its general nature and its likely behaviour.

They are derived by relating certain areas and volumes to their circumscribing rectangles or prisms. These coefficients are known as the coefficients of fineness.

V is the volume of displacement;

Aw is the waterplane area;

AM is the underwater area of the midship section; and

L, B and T are the length, beam and draught.

Then the coefficients of fineness are defined as follows:

In comparing values of these coefficients between ships it is important to ensure that the same definitions of L, B and T are used. Usually L is the length between perpendiculars except for the waterplane coefficient where the length on waterline is taken. B is usually the maximum beam which may be greater than that at the waterline amidships. T is usually the mean draught between perpendiculars. Also, usually L, B and T are taken as defining the external hull but sometimes moulded dimensions are used, that is to the inside of the plating. 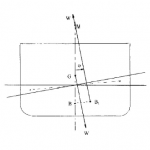 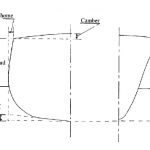 Come on, It's time for your posts!