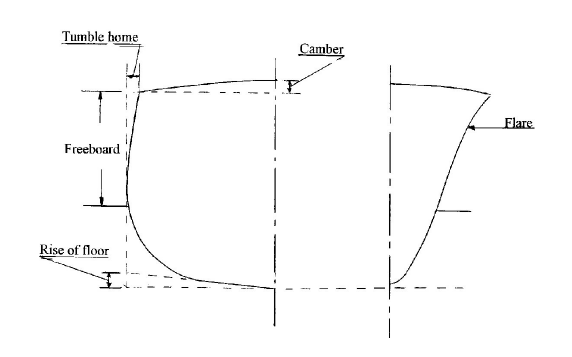 Picture shows typical cross-sections of a ship near amidships and near the bow. It will be noted that:

• The upper, weather, deck is curved so that any water will drain to the sides. The amount by which the centre of the deck is above the side is known as the camber. Decks other than the weather deck usually have no camber as not having one facilitates construction.

• The bottom of the hull may rise from the keel to the turn of bilge. This rise is called the rise of floor.

• The distance of the deck at side above the waterline is known as the freeboard. The greater the freeboard the greater the volume of the hull above water. Assuming this volume is watertight, it represents a reserve of buoyancy should the ship take on extra weights or lose buoyancy from the main hull. 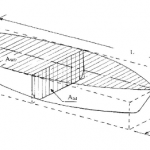