Water depth has a profound effect on maneuvering. In a harbor, water depth may vary from deep to conditions in which there is danger of touching bottom.

The behavior of the ship changes with changes in water depth. A ship’s resistance increases as water depth reduces. The increase becomes significant when the water depth is less than twice the mean draught. The effect of this increased resistance is a reduction in speed, unless engine revolutions are increased.

As well as speed, water depth affects maneuvering, and as depth and under keel clearance reduce, turning ability deteriorates, virtual mass increases (increase in a ship’s mass resulting from water being dragged along with the ship) and the effect of the propeller transverse thrust on yaw alters. As a result, a ship can become difficult, if not impossible, to control during a stopping maneuver as the rudder loses the beneficial effects of the propeller slipstream, and the bias off-course may become more pronounced. The increase in virtual mass is most noticeable when a ship is breasting on to a quay or jetty. Virtual mass in sway motion is invariably large, increasing as under keel clearance reduces. Consequently, any impact with a quay wall, jetty or fender will be much more severe if under-keel clearance is small. Similarly, when a large ship moored in shallow water is allowed to move, the momentum can be considerable.
Fortunately, the situation is alleviated by the considerably increased damping of any movement that is a consequence of shallow water and small under-keel clearance.

Water depth limits a ships speed. There is a maximum speed that a conventional displacement ship can achieve in shallow water which can be less than the normal service speed. This is called the ‘limiting speed’. Limiting speed needs to be considered during passage planning. Knowledge of areas where ship’s speed is limited by water depth is important because any increase in engine power to overcome the limiting speed will greatly increase wash. In simple terms, the limiting speed can be calculated from the formula:

where h is the water depth in meters and Vlim is speed in knots.

In shallow water, and because of insufficient engine power, a conventional ship may be unable to overcome the limiting speed. However, some powerful ships such as fast ferries can overcome limiting speed but in doing so produce dangerous wash.

Squat is the increase in draught and trim that occurs when a ship moves on the surface of the sea. At low speed, a ship sinks bodily and trims by the head. At high speed, a ship bodily lifts and trims by the stern. At especially high speed, the ship can plane. However, squat is greatest in shallow water where the resulting increase in draught and trim can cause grounding.

This, of course, provides a further limit on speed in shallow water, consideration of grounding due to squat being especially important if the under-keel clearance is 10% or less of the draught and the speed is 70% or more of the limiting speed.

In shallow water, squat can be estimated by adding 10% to the draught or 0.3 meters for every 5 knots of speed.

If the waterway is restricted in width as well as depth, this can also have an effect on performance. If the underwater midship area of the ship is significant compared to that of the waterway (over 20%, say) then this ‘blockage’ will further increase resistance, increase squat and create a ‘backflow’ of water between the ship and the waterway. This will cause silt to go into suspension or deposit on the bed of the channel, and may erode the waterway. It may also cause bank material to be transferred to the bed of the waterway.

A further effect may also occur. If the banks are high relative to the water depth, the ship may steer away from the bank. This ‘bank effect’ is due to backflow between the bank and the ship creating a low pressure region amidships. This causes the ship to be ‘sucked’ towards the bank, and a pressure wave between the bow and the bank (the ‘bow cushion’) pushes the bow away from the bank and the stern is drawn in.

Bank effect increases with increases in speed, blockage (i.e. when the cross-sectioned area of the ship is large relative to the cross-sectioned area of the bank) and low under-keel clearance. If speed is too high, bank effect can be severe and sudden, catching the ship handler unaware. It is advisable to slow down and to steer towards the bank. By so doing, it may be possible to strike a balance, with the ship running parallel to the bank. Bank effect is also felt on bends in a waterway when proximity to the outer bank may ‘help the bow round’ a tight bend.

Interaction with other ships

Just as ships can interact with banks, they can also interact with other ships. The same basic physical factors are involved, shallow water, speed and distance off. When one ship comes too close to another at high speed, then one or more things can happen. The ship may turn towards, or be drawn towards the other ship, or both ships may sheer away from each other, or the ship may turn towards (across) the other’s bows.

These hydrodynamic effects are collectively known as ‘interaction’. They can and do lead to collisions or contact. Interaction is accentuated by shallow water when a large hydrodynamic effect can render a ship almost impossible to control. To minimize their effect, it is essential that masters anticipate the situation, that speed is reduced before the encounter, if practicable, and that the maximum passing distance is maintained. This is especially true when overtaking.

Interaction is more of a problem when overtaking than when crossing on a reciprocal course, because the forces have more time to ‘take hold’ of the other ship. But it should be remembered that both ships are affected by the interaction and both should take care to minimize its effect. Research has shown that mariners accept closer passing distances for overtaking ships than for crossing ships.

Approach channels allow a deep-draught ship to enter an otherwise shallow port and may provide many of the external factors that affect maneuvering.

The width, depth and alignment of many approach channels are now subject to rigorous analysis at the design stage so that they provide the minimum hazard to ships that move along them. They are designed for single or two-way traffic and their width, depth and alignment are an optimized compromise between acceptable marine risk on the one hand and economic acceptability (with regard to dredging costs) on the other. 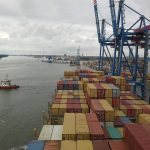