What is a draught survey?

A draught survey is a method of cargo weight determination by ship’s displacement calculations, empty and loaded (or loaded and empty), taking into account any change in weight of the liquids on board. The accuracy of the draught survey will be dependent upon the experience and the care taken by the surveyor concerned, on the documentation of the vessel, on the spirit of co-operation of the vessel crews and of the shore terminal personnel and, last but not least, on the instruments used by the draught surveyor and the weather and sea conditions in the harbour.

In the following sections details will be given regarding the procedures to be followed for the draught survey but before going any further, it is necessary to explain the following basic principles:

1. The Principle of Archimedes

Referring to the “Principle of Archimedes”, i.e. a vessel when freely floating in water, will displace a weight of water equal to its own weight, it is obvious that the weight of the displaced volume of water will not only be the weight of the cargo on board (loaded or unloaded). This weight will also include:

– the weight of the vessel in light condition, i.e. including all the equipment required for sailing; and the provisions;

– the residual weight (borne by trade patterns and changing from time to time);

– all deductible liquids on board;- ballast: required for stability reasons;

– constant: see definition in the glossary.

2. Variation of displacement of a loaded ship

It also follows from the “Principle of Archimedes” that:

(a) If a weight of cargo, say 80,000 tonnes, is loaded on (or unloaded from) a vessel floating freely in water of any measured density, then the vessel will sink (or float) into the water until the total weight of water displaced is equal to the original weight of the vessel plus (or minus) the 80,000 tonnes of cargo which has been loaded (unloaded) and plus (or minus) density variation of the water intervened between the starting survey (first measurement) and the finishing survey (second measurement).

In the draught survey daily practice one of the complicating elements is due to the fact that “empty” ships (that is before loading or after unloading) are in actuality always loaded with ballast water which makes the calculation of the cargo loaded or unloaded more difficult. The ballast water, that is pumped outboard during loading of cargo, and inboard during unloading, moreover, tends to hide sediments that can be assumed or misidentified with the cargo.

When sailing without cargo a vessel has to be ballasted to be at sufficient draught for manoeuvrability and the submerging of its propeller. After arrival at the loading berth, the starting survey is usually carried out when the vessel is still ballasted. Consequently, in order to be able to calculate “the light ship weight”, it is most important to determine a reliable ballast quantity. This quantity is, together with fresh water, fuel oils, etc., deducted from the vessel’s gross weight. After completion of loading, again ballast tanks are sounded to determine possible residuals. It is commonly accepted that ballast water has the greatest influence on the final tolerance in the out-turn figure. Consequently it must be emphasized that greatest care should be taken during all measurements and observations regarding the ballast. It is not unlikely that in a near future “inbuilt new instruments” of the ship will permit to measure with high accuracy the mass of liquid present at any given time in each tank/compartment of the vessels.

Throughout the world, millions of tonnes of raw and processed materials are bought and sold every day. If any of those materials are carried by ship, it is possible that the weight of the consignment will be measured by a draught survey. This code of standards and procedures has been compiled as an aid to the parties involved. Virtually all draught surveyors have a qualification as Master or comparable professional skill.

The following procedures were compiled taking into account the existing bibliography and references.

It is frequently the case that two or more separate cargo lots are loaded into a vessel, either during a more or less continuous operation at the same port, or sequentially at separate ports. The latter situation may arise due to draught restrictions at the first port, resulting in the need for the vessel to “top-up” at a second port or vice versa at the unloading port(s).

Where two or more cargoes can be loaded or unloaded separately and fully, it is preferable that an initial draught survey be conducted, followed by intermediate surveys to calculate the weight of the first and subsequent cargoes loaded or unloaded. On completion of loading or unloading, a final survey should be conducted to determine both the total weight and the weight of the final cargo.

In cases where loading or unloading is conducted sequentially at separate ports, it is recommended that both a starting and a finishing survey be conducted at each port. In this case, the starting survey should verify the weight already or still on board and should also recalculate the “constant” or undefined weight of the vessel.

In cases where multiple cargoes cannot be loaded or unloaded separately, or where several loading heads or unloading grabs are employed simultaneously, it is recommended that only the starting and finishing surveys be conducted. The apportionment of the weights of each of the cargoes should then be made by comparing surveyed weight with belt weightometer or shore weight to achieve a factor which is applied to each cargo, as follows:

It is considered that the adoption of this methodology for multiple cargoes will result in an order of accuracy within 0.5%, which is accepted for bulk cargoes throughout the world. However, where two or more loading heads or unloading grabs are employed simultaneously, it is important that the relative errors between individual belt weightometers be checked and recorded frequently. While absolute accuracy is not required, it is important that the weightometers be in harmony with one another, to avoid incorrect apportionment of cargo weights delivered by each loading head. Missing the shore reference the draught surveyor should assume written instructions on the criteria to be used (for instance stowage factor of goods, rail car, etc.).

It is recommended that draught surveys should always be conducted prior to and on completion of loading or unloading. Where loading or unloading takes place sequentially at several ports, the decision as to whether or not to conduct a pre-loading survey at the second or subsequent ports should be at the discretion of the shipper. In the majority of loading and unloadingports, the final draught survey certificate forms the basis on which harbour rates, loading, stevedoring and other service charges are levied, as well as completion of the Bill of Lading for the vessel. It is therefore in the interests of both the Shipper or Receiver and the Vessel Agent to ensure that a satisfactory draught survey has been completed. Payment for draught surveys on loading normally is the responsibility of the shipper and on unloading of the receiver. In practice these charges are normally incorporated into the cargo superintending fees. In cases of dispute between the shipper and the ship’s master over any draught survey, the master retains the right to arrange for a second, independent survey to be conducted but, in such cases, the cost of the second survey should be borne by the vessel operator.

7. Monitoring of discrepancies and trends

Particularly for comparison of load port and discharge port draught surveys it is essential to consider the eventual superficial moisture drainage occurred during the transit time.

As per world practice, moisture determination takes place on all minerals before loading and after unloading, the difference between the two figures can only be with a negative sign at disport. If and when data are otherwise, this vital element cannot be utilized and comparability becomes less reliable. When all factors and actors work properly this moisture difference should be equal to “bilge drainage” plus evaporation less sprinkled water on the load/unload belts for dust controlling apparatus.

It is strongly recommended that arrangements be made between shippers and consignees, whereby copies of Moisture Certificates and Draught Survey Certificates at the loading and out-turn ports are exchanged for each cargo. Where such arrangements have been entered into, the shipper should provide the consignee with the following information by telex, facsimile or other method which will ensure that the information is available prior to discharge:

– copy of Moisture Certificate(s) at loading port or ports;

– copies of Certificates of Draught Survey(s) conducted at the loading port or ports;

– notes provided by the surveyor in relation to sea and weather conditions at the time of loading, together with any comments on deficiencies found with the vessel or its equipment or difficulties encountered in the use of the ship’s tables.

It is important that the consignee or surveyor at the disport also be provided with a record, certified by the master or a ship’s officer of any tonnages pumped overboard from bilges during the voyage as a loss in cargo weight may occur through drainage and/or evaporation particularly on a long voyage involving significant climatic changes.

It can be pointed out that for instance most of the minerals and the coals shipped in bulk, drain moisture during the transit time and/or can be subject to be wetted by snow or rain or water (shore or vessel’s dust control installation) or to evaporate during loading and unloading operations. Statistical data collected over decades show that depending upon the cargo size the quantities involved by the above phenomena can be significant. Water drainage tends to be directly proportional to the level of superficial moisture at the loading point and to the length of the trip. Data indicate that in case of high departure level of superficial moisture (like 10% or more) and long sailing distance (like 40 days or more), involving significant climatic changes during the voyage, the drainage can be in the order of 1% of the cargo weight measured on departure.

In relation to the out-turn survey, this information should also be provided by the consignee to the shipper, so that trends between loading and discharge ports can be monitored and statistical information collected in an organized fashion. The systematic exchange of surveys made in different parts of the world would be equally important. This would allow the dissemination of truly uniform practice, make possible the study of trends, and identify possible anomaly by a given vessel. Such professional tool could be served properly and profitably by a specialized trade publication and possibly be supported by an internationally accessible library where all surveyed vessel data could be classified.

The following operations should be routine for the performance of draught survey either at loading or unloading port(s); a check should be made of any equipment malfunctions, including blockages in sounding pipes, etc., which could affect the accuracy of the survey.At most loading and discharge ports, there is pressure to commence operations as soon as possible after the vessel has berthed. Despite this pressure, sufficient time must be allowed for the surveyor to gain the necessary data before loading or unloading is commenced. 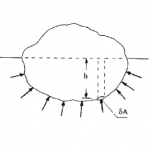