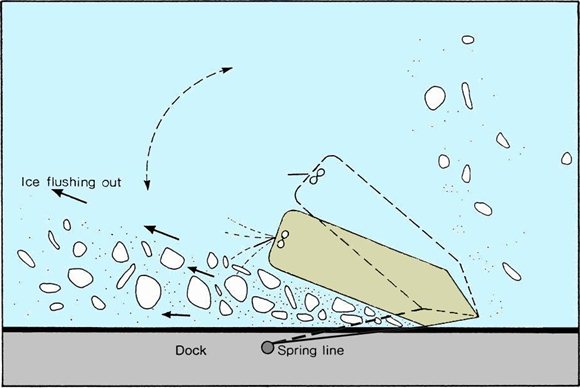 Handling characteristics will vary from ship type to ship type and from ship to ship. Handling qualities are determined by ship design, which in turn depends on the ship’s intended function. Typically, design ratios, such as a ship’s length to its beam, determine its willingness to turn.

However, desirable handling qualities are achieved only when there is a balance between directional stability and directional instability.

Length to beam (L/B), beam to draught (B/T), block coefficient, prismatic coefficient (ratios of the ship’s volume of displacement against the volume of a rectangular block or a prism) and location of longitudinal centre of buoyancy, all give an indication of how a ship will handle.

High values of L/B are associated with good course directional stability. Container ships are likely to have a L/B ratio of approximately 8, while harbour tugs, which need to be able to turn quickly and where course stability is not required, have a value of 2.5 to 3.

High values of B/T increase leeway and the tendency for a ship in a beam wind to ‘skate across the sea surface’. A B/T ratio of over 4 is large. Most merchant ships have a B/T ratio in the range of 2.75 to 3.75.A 22-metre fast motor yacht will have a B/T ratio of about 5.75.

Ships with large block and prismatic coefficients have poor course stability and a readiness to turn.When turning, they will do so easily. Large tankers have these characteristics.

Ships with a large protruding bulbous bow are likely to have their longitudinal centre of buoyancy far forward. As a result, the ship will show a tendency to turn.

A ship rotates about a point situated along its length, called the ‘pivot point’. When a force is applied to a ship, which has the result of causing the ship to turn (e.g. the rudder), the ship will turn around a vertical axis which is conveniently referred to as the pivot point. The position of the pivot point depends on a number of influences. With headway, the pivot point lies between 1/4 and 1/3 of the ship’s length from the bow, and with sternway, it lies a corresponding distance from the stern. In the case of a ship without headway through the water but turning, its position will depend on the magnitude and position of the applied force(s), whether resulting from the rudder, thrusters, tug, wind or other influence.

The pivot point traces the path that the ship follows.

It is important to understand where the pivot point lies and how lateral movement can cause sideways drift, knowledge which is essential when manoeuvring close to hazards.

The rudder acts as a hydrofoil. By itself, it is a passive instrument and relies on water passing over it to give it ‘lift’. Rudders are placed at the stern of a ship for this reason and to take advantage of the forward pivot point, which enhances the effect.Water flow is provided by the ship passing through the water and by the propeller forcing water over the rudder in the process of driving the ship. The optimum steerage force is provided by water flow generated by a turning propeller.Water flow is vital in maintaining control of the ship. While water flow provided by the ship’s motion alone can be effective, the effect will diminish as speed is reduced. Obstacles that deflect flow, such as a stopped propeller in front of the rudder, particularly when the propeller is large, can reduce rudder effectiveness. Reduced or disturbed flow will result in a poor response to rudder movements.

Conventional rudders are described as ‘balanced’; part of the rudder area is forward of the pintles to help the rudder turn and to ease the load on the steering motor. This arrangement provides for better hydrodynamic loading. A flap (Becker rudder) can be fitted to the rudder’s trailing edge. The flap works to increase the effective camber of the rudder and to increase lift.

Rudders can be defined by what is known as the ‘rudder area ratio’, which is a ratio of the surface area of the rudder divided by the ship’s length and draught. The rudder area ratio gives an indication of the likely effectiveness of a rudder. Merchant ship ratios range from 0.016 to 0.035. The larger the ratio, the greater the effect the rudder will have.

Thrust vectoring devices are fitted as an alternative to a rudder. They operate under the principle that a rudder is effective because it deflects the propeller slipstream, which initiates a turn and maintains a state of balance once the turn is established. Consequently, manoeuvrability is enhanced when all the thrust from a propeller is vectored. Azimuthing ducted thrusters, cycloidal thrusters and pump jets all operate by directing thrust to initiate and to maintain the turn.

Podded propulsors are devices where the prime mover is an electric motor, encased in an underwater streamlined pod, which connects directly to a propeller. Pods are fitted to the outside of a hull. They can be azimuthing or fixed. Propellers attached to them can push or pull. A propulsion pod acts as both propeller and rudder.

Bow thrusters and their use 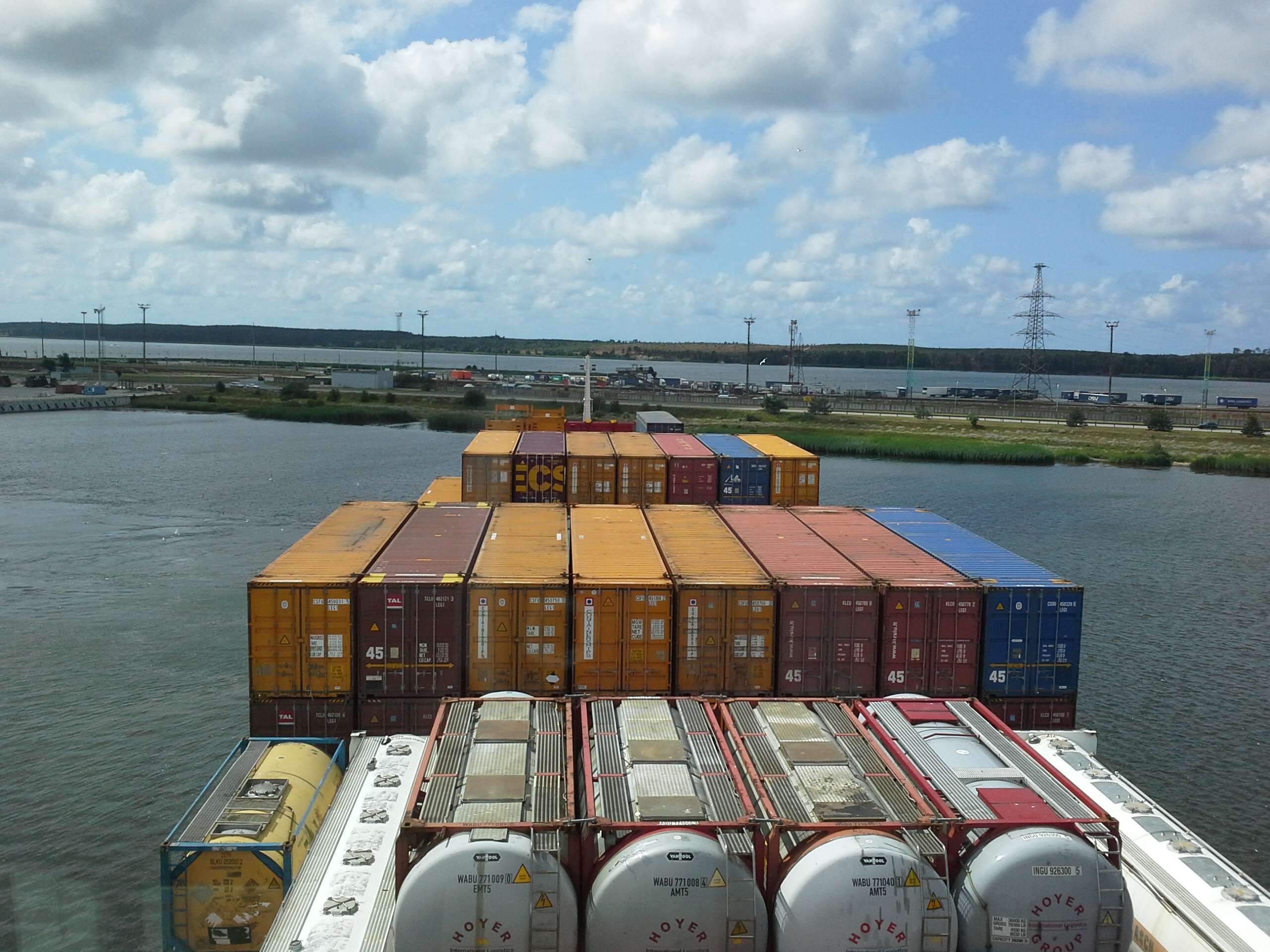 Lateral thrusters can be fitted in the bow or the stern.

Lateral thrusters are most effective when a ship has neither headway nor sternway. They create a turning effect by providing a side force at their location. Their effectiveness will depend upon the distance between the thruster and ship’s pivot point. When berthing a ship that has a single bow thruster, and no stern thruster, it is important not to become too focused on the bow, because this can be controlled with the thruster. Plan to get the stern alongside as a priority. Remember that pure rotation can only be induced by two lateral thrusters, one forward and one aft, opposing each other, and that a tug may be needed to control the stern of a large ship.

Bow thrusters are used when it is required to ‘breast’ on to or off a berth or to move the ship’s head from a jetty. Modern ships fitted with a bow thruster will often berth without tug assistance.

However, a bow thruster will lose its effectiveness as a ship’s speed increases. Depending on the hull and thrust tunnel design, thrust effectiveness can be lost at between 2 and 5 knots. The reason for this is the merging of the slipstream from the thruster with the general flow around a forward moving hull.
When speed increases above two knots, local loss of pressure over the hull, downstream from the thruster, creates a turning moment opposite to the moment produced by the thruster. The thruster may become ineffective.

Thrusting when stopped – When stopped and thrusting, a ship’s pivot point is likely to be aft. If a bow thruster is put to starboard on a stopped ship, the ship will turn to starboard.

Thrusting with headway – The pivot point will be forward, so thrusting will not be very effective, especially at high speeds.

Thrusting with sternway – The pivot point is aft and when the bow thruster is put to starboard, the ship’s bow will swing to starboard. The thruster will be effective, and will act as a form of ‘rudder’.

The time it takes for the rudder to respond to a helm order will determine how rapidly a ship gets into a turn. The quicker the rudder responds, the sooner the ship will begin to turn.

Manoeuvring characteristics at low speeds will generally be poor on twin screw ships fitted with a single centre line rudder. This is because the single centre line rudder may have to be moved to large angles before any part of it becomes immersed in the slipstream of one of the propellers. When not immersed, the lift produced by the rudder at low speeds will be very small, resulting in large turning circles and poor response to helm.

Transverse thrust is more pronounced when propellers are moving astern.

When moving astern, transverse thrust is caused by water passing through the astern-moving propeller creating high pressure on the starboard quarter of the hull, which produces a force that pushes the ship’s stern to port. Rudder angle can influence the magnitude of this force.

Masters should be aware of the variable effect of transverse thrust. As water flow over a ship’s hull changes, so does transverse thrust. The difference is most noticeable in shallow water. For example, a ship that turns to starboard in deep water may well turn to port in shallow water. Also, the magnitude of the force will change and, by implication, there will be a range of water depths for which the bias may be difficult to predict, something that is especially true when a ship is stopping in water of reducing depth.

It is essential for a master to understand just how much effect transverse thrust has on his particular ship.

Many berthing accidents occur because the speed of approach is too high. The master should advise the pilot of the ship’s stopping distance and general manoeuvring characteristics, giving particular emphasis to speed, corresponding engine revolutions and to the critical range.When close to a dock, speed should be the minimum necessary to maintain control.

It can be difficult to reduce speed and maintain control. This is because reduction in propeller speed reduces water flow over the rudder and the rudder becomes less effective. The normal procedure for stopping is to put engines astern. However, when a propeller rotates astern, water flow over the rudder is broken and the ship will be less responsive to helm. In addition, there is the disruptive effect of transverse thrust.

For this reason, it is essential to plan a stop by reducing speed in good time. Also, it should be appreciated that putting engines to full astern during an emergency could result in a loss of steerage.

The ‘kick ahead’ is used when a ship is moving forward at very slow speed due to minimal water flow over the rudder and the ship is not responding to helm. It is also used to initiate a turn. Engines are put ahead for a short burst with the objective of increasing water flow over the rudder, but without increasing the ship’s speed. Engine power is reduced before the ship’s longitudinal inertia is overcome and she begins to accelerate. When using the ‘kick ahead’, it should be borne in mind that prolonged and frequent kicks ahead will increase the ship’s speed.Apply full rudder to provide maximum steering force. Anything less than hard over during turning will allow a greater proportion of the power to drive the ship ahead. It is important to reduce engine power before reducing helm.