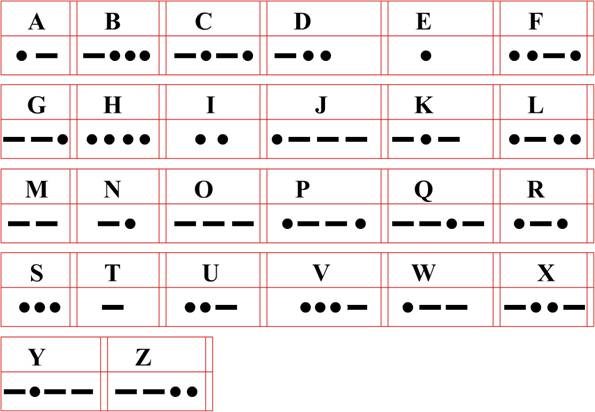 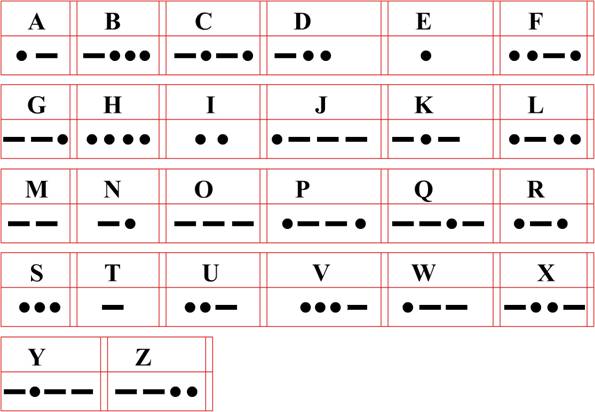 Parts of a signal made by flashing

The call. It consists of the general call or the identity signal of the station to be called. It is answered by the answering signal.

The ending. It consists of the ending signal  “AR” which is answered by “R”.

If the entire text is in plain language the same procedure is to be followed. The call and identity may be omitted when two stations have established communications and have already exchanged signals.

The General Call signal (including call to an unknown station):

“AA    AA   AA” etc. is made to attract the attention when wishing to signal to all stations within visual signaling distance or to a station whose name or identity is not known.

The call is continued until the station addresses.

Once the station signaled to has answered by signaling:

The Answering signal “TTTT” etc. is made to answer the call and it is to be continued until the transmitting station ceases to make the call.

The transmission starts with the signal “DE” followed by the name or identity signal of the transmitting station.

After each word or group of words is transmitted the receiving station should signal “T”, meaning that the word or group has been received.

If the receiving station has not received a part of the message then it would send a signal “RPT” meaning REPEAT WHAT YOU HAVE SENT.

If only a part of the message has not been received properly then it would send as follows:

RPT AA: Repeat all after

RPT AB: Repeat all before

The transmitting station on completing of transmission may send the signal RPT and then commence re-transmitting the entire message.

If however the transmitting station transmits RPT at the end of its transmission and then does not re-transmit then it would mean that it is requesting the receiving station to repeat the entire transmission of what it has received.

The ‘erase’ signal when sending or receiving

The Erase signal “EEEEE” (group of 5 E’s): is used to indicate that the last group or word was signaled incorrectly. It is to be answered with the erase signal. When answered, the transmitting station will repeat the last word or group, which was incorrectly signaled, and then proceed with the remainder of the transmission.

If the receiving station receives the message correctly but is unable to understand what has been sent, then it would send the signal by code (ZL) for it to mean, “your signal has been received but not understood”.

A correctly received REPETITION is acknowledged by the signal “OK”. The same signal may be used as an affirmative (YES) answer to a question (“It is correct”).

The Ending signal “AR” is used in all cases to indicate the end of a signal or the end of the transmission. The receiving station answers with the signal “R” (“Received” or “I have received your last signal”).

If the transmitting station sends the signal “CS” it means that it is requesting the name or identity signal of the receiving station.

Use of the waiting signal AS

The signal “AS” is used both as a waiting signal as well as a period signal to separate groups of words.

If the signal “AS” is made independently or after the end of a signal then it means that the other station must wait for further communications.

If the signal “AS” is inserted between word groups then it means that it is being used as a separator between the groups of words.

The use of the procedure signals C, N (or NO), RQ

The signal “C” should be used to indicate an affirmative statement or an affirmative reply to an interrogative signal. Meaning, it is used when stating in the positive by the transmitting station or when answering positively to a statement by a receiving station.

The signal “RQ” should be used to indicate a question.

Note: When the signals “N” or “RQ” are used to change an affirmative signal into a negative statement or into a question, respectively, they should be transmitted after the main signal.

To transmit the following:

Important: The signals “C”, “N” and “RQ” cannot be used together with single letter signals.

The meaning and use of YU, YV, YZ

YV – The groups which follow are from the International Code of Signals.

YV 1 – The groups which follow are from the local code

YZ – The words which follow are in plain language.

Owing to the nature of the apparatus used (whistle, siren, fog-horn, etc.) sound signaling is necessarily slow. Moreover the misuse of sound signaling is of a nature to create serious confusion at sea. Sound signaling in fog should therefore be reduced to a minimum. Signals other than the single letter signals should be used only in extreme emergency and never in frequented navigational waters.

The signals should be made slowly and clearly. They may be repeated, if necessary but at sufficiently long intervals to ensure that no confusion can arise and that one-letter signals cannot be mistaken as two – letter groups.

Masters are reminded that the one-letter signals of the Code, which are marked with an (*), when made by sound, may only be made in compliance with the requirements of the International Regulations“ for Preventing Collisions at Sea. Reference is also made to the single – letter signals provided for exclusive use between an ice- breaker and assisted vessels.

One short blast to mean “I am altering my course to starboard”;