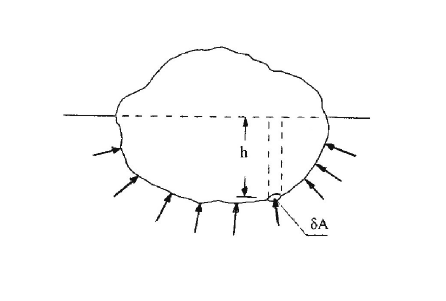 It was Archimedes who first realised, in his “eureka” moment, that a body that is immersed completely in water will displace a volume of water equal to the volume of the body and that the apparent weight of the body, when immersed, will be reduced by the weight of water displaced.

The resultant of these forces will be an upward force equal to the weight of the water displaced by the body. This is the body’s displacement, often denoted by the symbol Δ. If the water density is ρ then the pressure acting upon a small area δA will be ρh and the force will be ρhδA. By integrating over the whole of the wetted surface the total force on the body is ΣρhδA = ρV where V is the volume of the body below water (called the volume of displacement). This is termed the buoyancy force, or simply the buoyancy. For equilibrium this force must act vertically as any resultant horizontal force would cause the body to move in the direction of that resultant. Also for equilibrium the buoyancy force must be equal and opposite to the weight of the body. If it were not the body would move up or down. The two forces must act in the same line otherwise there would exist a moment causing the body to rotate. Another way of looking at this is to consider the body removed and replaced by a volume of water, surrounded by a weightless membrane of the same shape as the body’s underwater form. The water surface will be horizontal and the forces on the membrane will support the weight of water within.