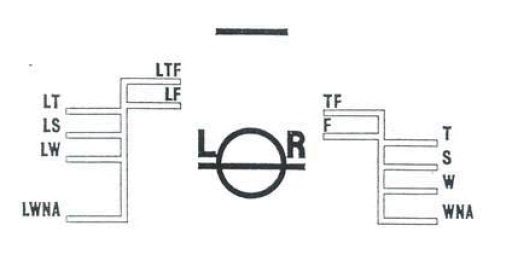 Load lines. The deck line and load lines, laid down in Load Line Rules, are marked on the ship’s side as follows.

The deck line is a horizontal line 300mm in length and 25mm in breadth marked amidships with its upper edge passing through the point where the continuation outwards of the upper surface of the freeboard deck intersects the outer surface of the shell.

The load line disc is 300mm in diameter, intersected by a horizontal line 450mm in length and 25mm in breadth, the upper edge of which passes through the centre of the disc. The disc is marked amidships below the deck line.

The horizontal lines are 230mm in length and 25mm in breadth which extend from, and are at right angles to, a vertical line marked 540mm forward of the centre of the disc and which indicate the maximum depth to which the ship may be loaded in different circumstances and in different seasons.

These lines are as follows:

W The Winter Load Line indicated by the upper edge of a line marked W. This is 1/48 of the summer draught below S.

WNA The Winter North Atlantic Load Line indicated by the upper edge of the line marked WNA. This line is not marked on a vessel over 100m in length. The line is 50mm below W.

T The Tropical Load Line indicated by the upper edge of a line marked T. T is 1/48 of the summer draught above S.

F The Fresh Water Load Line in summer indicated by the upper edge of a line marked F. This is the distance above S equal to the “Fresh Water Allowance” (FWA).

TF The Tropical Fresh Water Load Line indicated by the upper edge of the line marked TF. This is above the T line by a distance equal to the FWA.

The letters marked alongside the disc and above the line through the centre of the disc indicate the name of the classification society, for example Lloyd’s Register of Shipping (L.R.) which may assign the freeboard.

The load lines S, W, WNA and T indicate the maximum draught in salt water. The maximum depths to which a ship may be loaded in different seasons in the various parts of the world are laid down in the Load Lines Rules 1968.

The world has been divided into various “load line zones” and seasonal areas. These are shown in a chart carried on board the vessel. These zones govern the depth to which a vessel may be loaded. 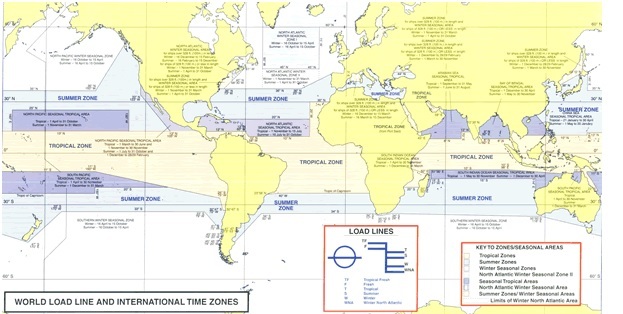 A vessel passing in the course of her voyage from one zone or area into another zone or area, in which another load line applies, must have been loaded in such a way that when she arrives in the zone or area in question, her mean draught will not be in excess of the maximum draught allowed in the second zone or area.

Where seagoing vessels navigate a river or inland water deeper loading is permitted corresponding to the weight of fuel, water, etc., required for consumption between the point of departure and the open sea. When loading in fresh water or in dock or river water of any density less than that of sea water a “Dock Water Allowance” is made for the difference in density.